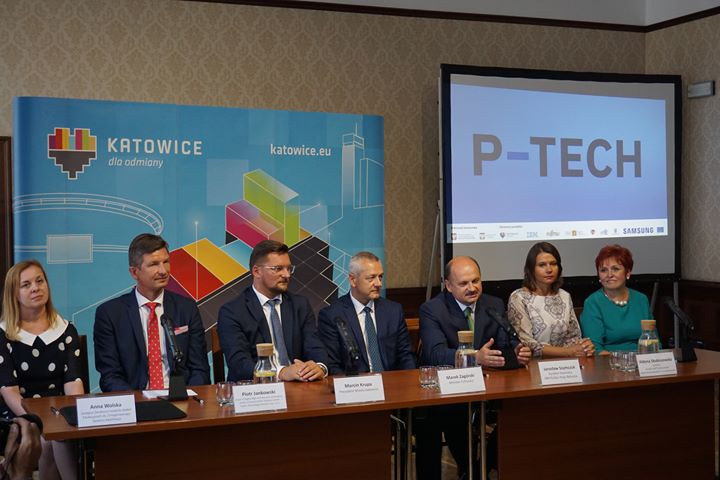 IBM announced today that it is launching the P-TECH educational and vocational development programme in cooperation with the Educational Research Institute and Samsung and Fujitsu Technology Solutions. The programme will be implemented with the support and cooperation of the City of Katowice and under the honorary patronage of Prime Minister Mateusz Morawiecki and the Ministry of Digitization.

The main aim of P-TECH is to support local communities by properly preparing young people to work in IT professions, which, in addition to obtaining a high school diploma, requires appropriate skills, but not necessarily several years of study at a higher education institution.

Today in the era of economy 4.0, changes in the labour market are taking place so quickly that only with the close cooperation of business can vocational schools educate graduates whose qualifications will be current" – said Anna Wolska, IBE's Deputy Director for the Integrated Qualifications System. This is also why we hope that the curricula developed together with P-Tech programme partners will allow market qualifications to be described and incorporated into the Integrated Qualifications System. In this way, programme graduates will gain an additional competitive advantage in the labour market, and their qualifications will be able to be compared worldwide because they are referenced to the Polish and European Qualifications Frameworks – she added.

The programme will enable students in five years of study to obtain a high school diploma and qualifications as an IT technician or mechatronics technician. They will be learning under the care of a mentor and acquiring new skills, e.g. they will be following the daily work of their supervisor (known as job shadowing), getting to know the business environment from within, or participate in paid internships.

P-TECH does not require any changes to the core curriculum. A partner company in cooperation with the teaching staff of a given school will provide additional substantive input or tools for existing subjects and classes to equip students with the specific skills needed in the labour market. The partner company also agrees to support P-TECH graduates as they enter the labour market.

Thanks to the P-TECH programme, the Complex of Technical and General Secondary Schools No. 2 in Katowice will start cooperating with IBM Poland, Śląskie Techniczne Zakłady Naukowe from Katowice with Fujitsu Technology Solutions, and Technical School No. 1 "Forestry School" in Wronki’s Szamotuły district with Samsung.

The first school was included in the P-TECH programme in 2011 in Brooklyn as part of a cooperative agreement between the Department of Education of New York, City University of New York and IBM. Since then, P-TECH has been implemented in over 200 schools in 19 countries around the world in cooperation with over 600 technology partners.

In Europe this year, P-TECH also initiated programmes in schools in Great Britain, France, the Czech Republic and Ireland.

Meeting of the Scientific Council of the Educational Research Institute

Appointment of the new Scientific Council of the Educational Research Institute