Polish students are ahead of everyone but young Estonians in mathematical literacy in the European Union. In terms of reading literacy, Polish youths occupy 4th place among EU countries, and in science literacy, they are third. In all three areas included in the study, the results of Polish students are above the average for OECD countries, which places them among the world's best. The best results in the study were achieved by students from four regions of China, as well as Hong Kong, Singapore and Macao. Over 660,000 students from 79 countries and regions of the world participated in the PISA 2018 study.

The PISA study (Program for International Student Assessment ) is organized by an international consortium supervised by the Organization for Economic Co-operation and Development (OECD) and representatives of member countries. It is the largest study of students’ skills in the world, conducted every three years in all OECD member countries, as well as in over a dozen other countries. Poland has participated in it from the very beginning, since 2000. The Polish edition of the study was conducted by a team of scientists from the Educational Research Institute, and financed by the Ministry of National Education.

The PISA survey shows the level and diversity of the skills of fifteen-year-olds that are developed during and outside of school education.

Each edition of PISA emphasises one of three areas: mathematics, reading or science. In the PISA 2018 study, the leading area was reading literacy.

In 2018, 79 countries and regions participated in the study, and the number of students surveyed exceeded 660,000. Poland was represented by 5,653 students from 227 schools.

The average score of Polish students in the field of reading literacy was 512 points. This was one of the highest results in the world. Significantly better results were obtained only by students from Asian countries – China (actually four Chinese regions participating in the study: Beijing, Shanghai, Jiangsu, Guangdong), Singapore, as well as students from Estonia, Canada and Finland. The result of Polish fifteen-year-olds was similar to those of students from South Korea, Sweden, New Zealand, Ireland and the United States (the differences were not statistically significant), and much better than the results of students from the Czech Republic, Germany, France or Russia.

Without the ability to independently solve problems in various areas of knowledge and skills, professional success or an active and satisfying adult life are elusive at best. The PISA survey verifies whether students can practically and effectively use theoretical knowledge, for example, to analyse and predict various phenomena, distinguish scientific facts from opinions, develop hypotheses and verify them. Polish youths cope with this quite well – stated Dr. Piotr Stankiewicz, DSc, Director of the Educational Research Institute in his comments on the PISA 2018 results.

In the field of mathematical literacy, Polish fifteen-year-olds obtained a score of 516 points, 27 points more than the average for OECD countries. The best results were obtained by students from Asian countries or regions, including China, Singapore, as well as Macao, Hong Kong, Japan and South Korea. Apart from Asian countries, only one European country achieved a significantly higher result than Poland: Estonia. The results from the Netherlands, Switzerland and Canada were statistically indistinguishable from those of Polish students. The remaining 66 countries or regions participating in the study had lower results than Poland.

In science literacy, Polish students obtained an average score of 511 points, which places them in third place among European Union countries. This result was 22 points higher than the OECD average. The results of young Poles were similar to those of fifteen-year-olds from Hong Kong, Taiwan, New Zealand, Slovenia and Great Britain – the differences between Poland and these countries were not statistically significant. 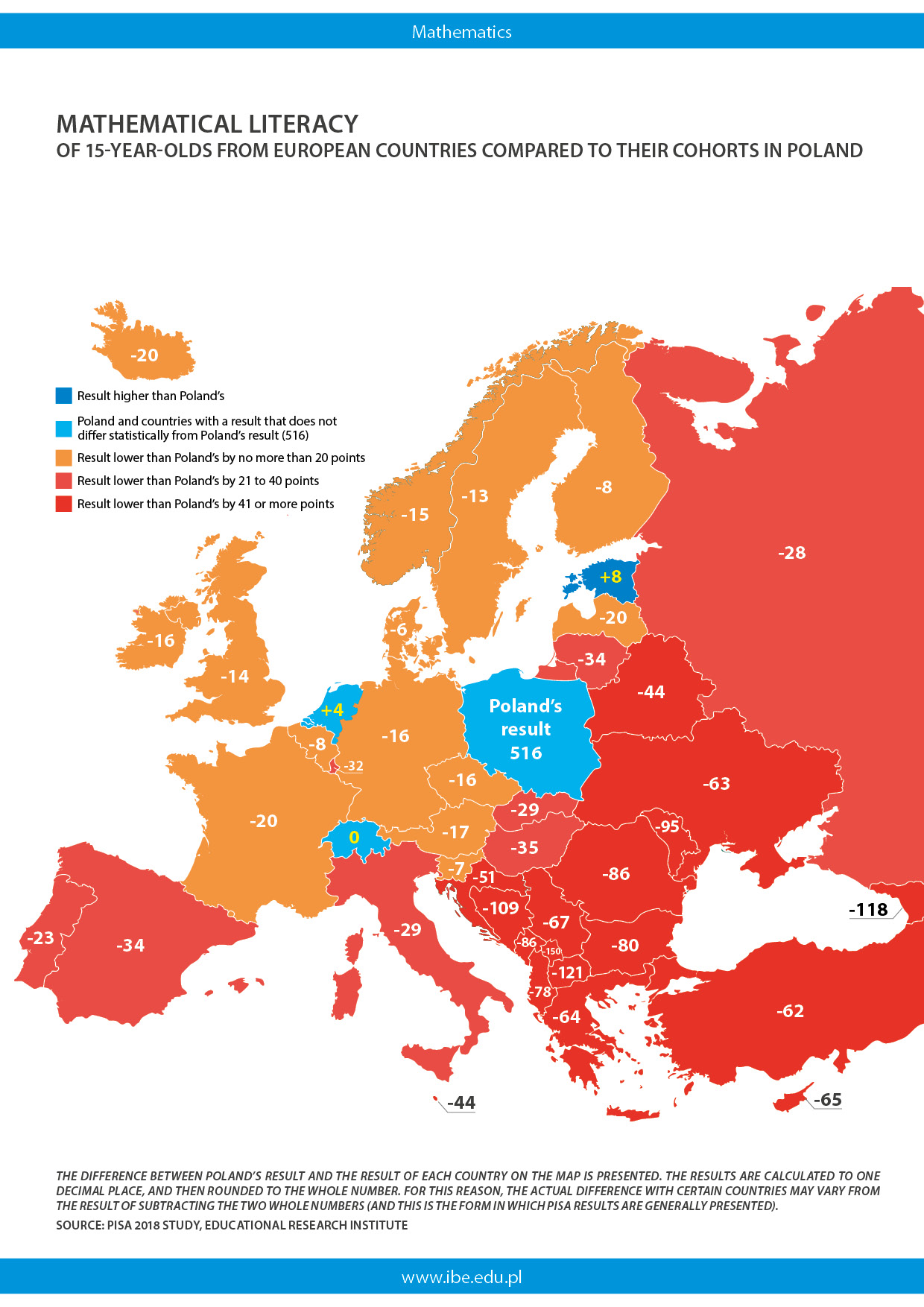 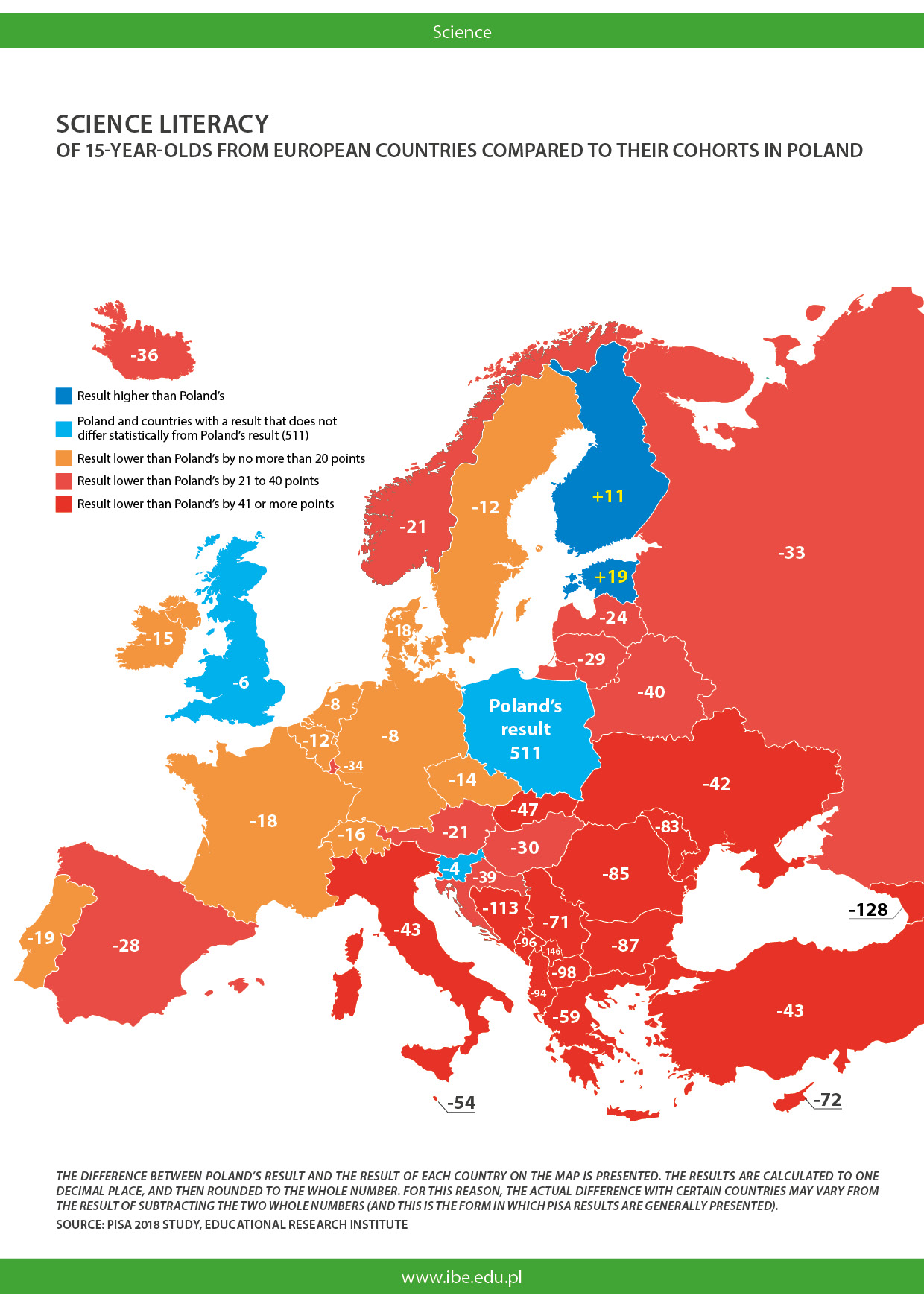 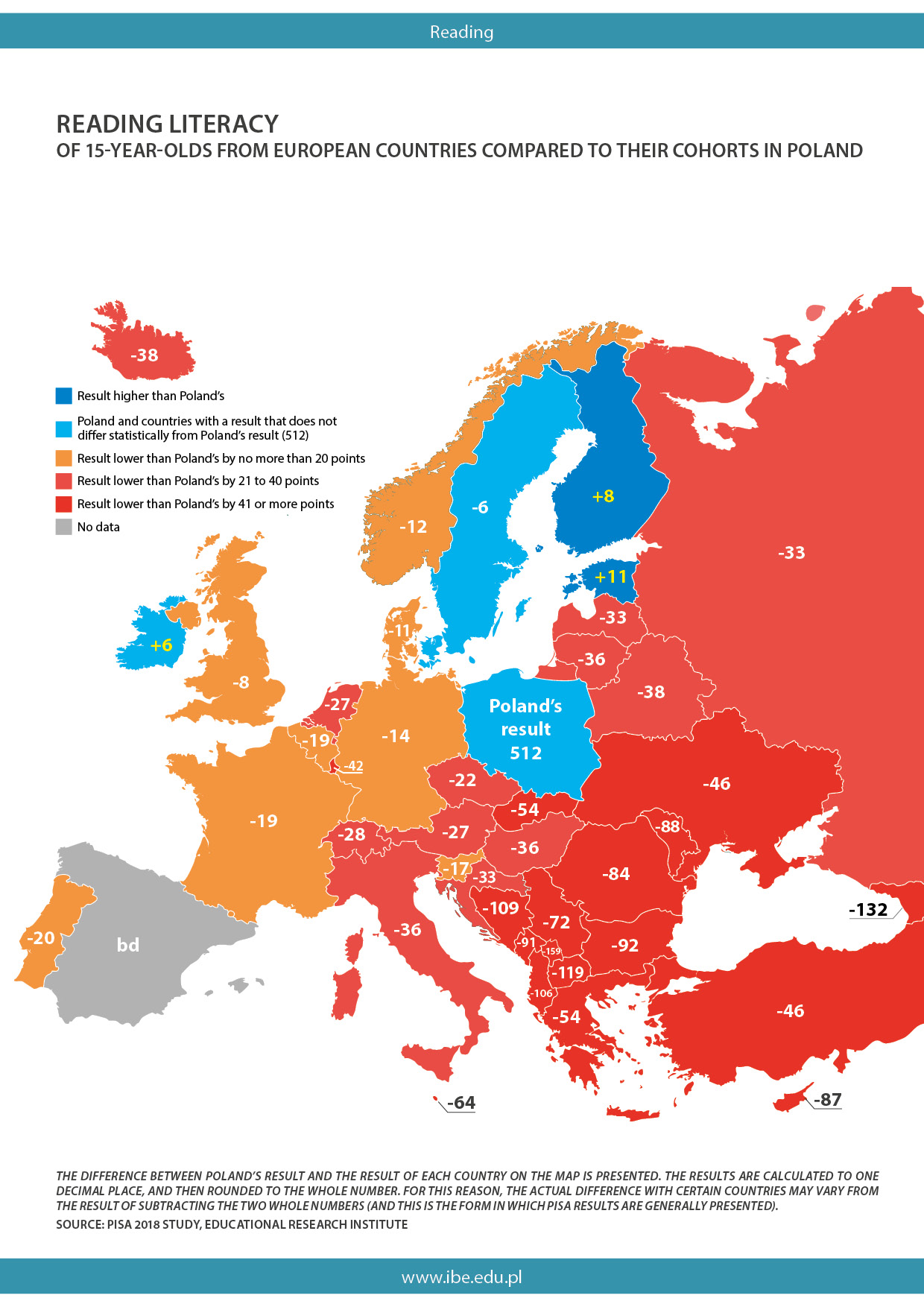 PISA 2018 shows that the percentage of students achieving the lowest results in terms of reading literacy was very similar in Poland to the previous edition of the survey (PISA 2015) and amounted to 14.6%. However, it is worth noting that in 2000, almost every fourth student in Poland (23%) fell into this category. Subsequent editions of the study showed that the percentage of persons at the lowest levels of skills was systematically falling. It has been less than 15% since 2009, which means that Poland, as one of a handful of EU countries, has achieved the indicator that the EU countries set for themselves as a target. There is also a noticeable increase in the percentage of students achieving the highest results: in 2000 it was only 6%, it is now 12.2%. The difference between Poland and OECD countries is also visible, where 23% of students achieved the lowest scores, while the percentage of respondents with the best scores was 8%.

PISA measures the basic skills that are needed to function in an increasingly complex world. The PISA survey shows that the Polish school system is coping very well with this task. We belong to a small group of countries that have managed to improve student performance over the past several years. This is due to the consistent emphasis on the importance of the skills of reasoning, argumentation and interpretation in teaching major school subjects – says Dr. Michał Sitek, head of IBE’s International Research Team.

The large difference between boys and girls in their mastery of reading has been maintained. In Poland, every fifth boy scored below the two lowest levels (on a six-point scale), while only every tenth fifteen-year-old was below these two lowest levels. On the other hand, 9.6% of boys and 14.8% of girls were located at the highest levels of 5 and 6. The differences in the results between boys and girls is not specific to Poland and can also be found in other countries.

More information, including maps showing the results, as well as infographics and brochures with more details are available at: www.pisa.ibe.edu.pl.